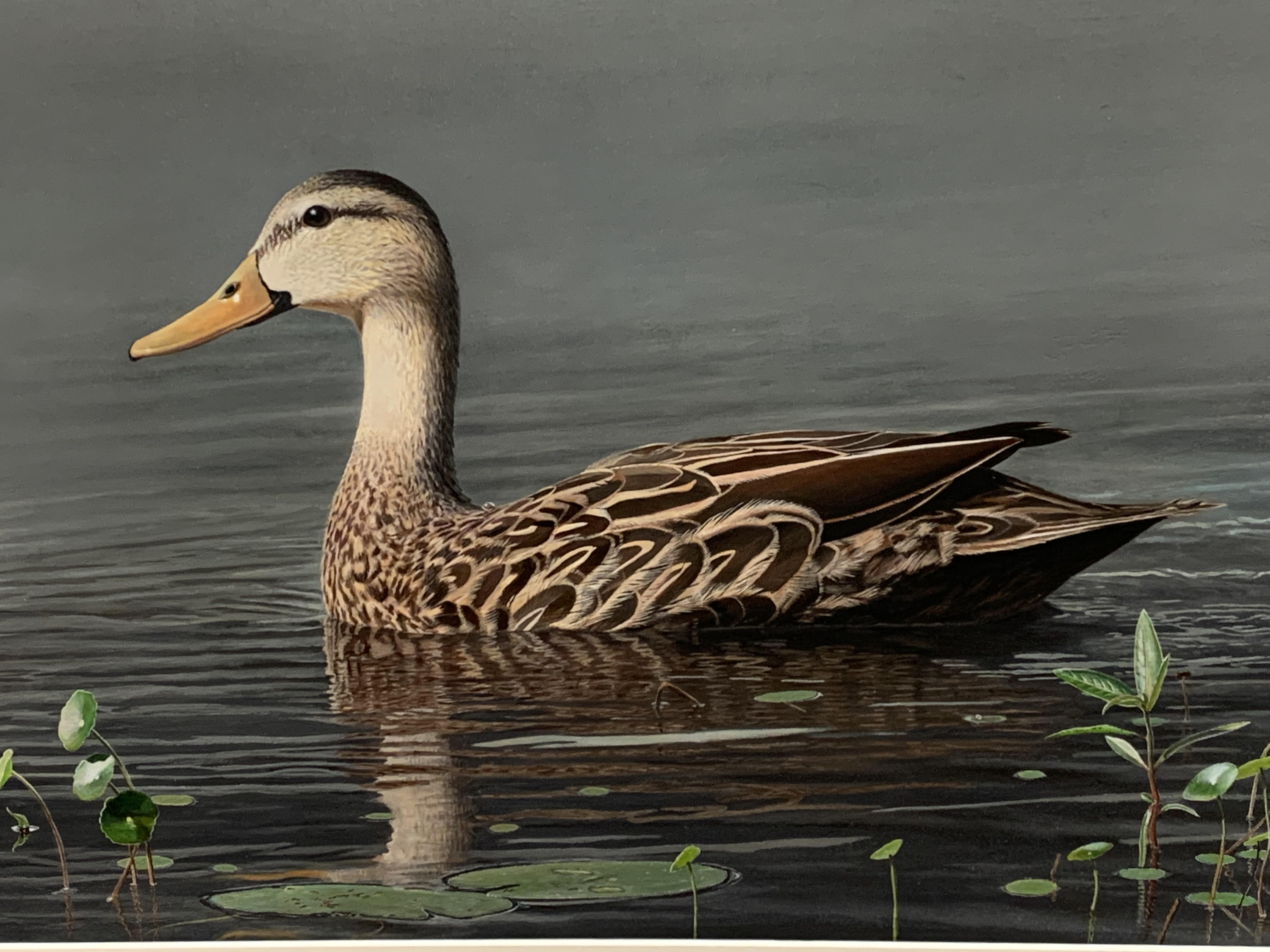 John Nelson Harris of Groveland, Florida, has won the 2021 Louisiana Waterfowl Conservation Stamp Competition sponsored by the Louisiana Department of Wildlife and Fisheries (LDWF). The annual contest, in its 33rd year, determines the image on what is commonly called the Louisiana Duck Stamp.

Mottled duck was the species selected for this year’s contest and Harris’ painting features a mottled duck calmly swimming in a placid waterbody.

“We had 13 entrants this year, which was down 40% from last year, and had only two from Louisiana artists,’’ said LDWF Waterfowl Program Manager Larry Reynolds. “I think that can be attributed to the COVID-19 pandemic. “But the artwork of the 13 entries was striking and impressive. The winning entry featured intricate detail of the mottled duck, a species special to Louisiana because it calls Louisiana’s coastal marshes home year-round. They are truly our duck.’’

Harris’ entry garnered first-place votes in the second and final round of judging by four of the five judges.

Because mottled ducks live their entire lives in coastal wetland habitats, they are at risk from the degradation and loss of those habitats. Both mid-winter and breeding population estimates for mottled ducks have declined markedly in the last decade, resulting in a growing conservation concern for this iconic Gulf Coast species.

Judges for this year’s contest were: James Harris, a retired U.S. Fish and Wildlife Service biologist and longtime habitat manager at Delta National Wildlife Refuge located at the mouth of the Mississippi River; Dr. Luke Laborde, a professor of wildlife ecology at LSU who has assisted LDWF with harvest/hunter-opinion surveys and economic valuation of LDWF activities; Randy Caminita, a professional wildlife artist from Folsom and past competitor in the duck stamp competition; John Robinette, a retired LDWF wildlife biologist as well as a wildlife artist; and Eric Ottemann, a partner at a New York Life firm and the incoming Campaign Chairman for Ducks Unlimited.

The Louisiana Legislature authorized the Louisiana Waterfowl Conservation Stamp program in 1988. The program was created to generate revenue for conservation and enhancement of waterfowl populations and habitats in Louisiana. Since 1989, more than $14.5 million has been generated for wetland conservation with approximately $6 million spent on land acquisition. A total of $278,000 was raised last year.

In addition, revenues have supported wetland development projects on wildlife management areas and the Louisiana Waterfowl Project, a cooperative endeavor between LDWF, Ducks Unlimited, the Natural Resources Conservation Service and U.S. Fish and Wildlife Service to provide habitat for waterfowl and other wetland birds on private lands.

The 2021 stamp will go on sale June 1, 2021. The artist will retain the original artwork and will have reproduction rights to the image for prints and other commodities after LDWF has used the image to produce the stamps.