LDWF’s biologists and technicians collect harvest and biological data and conduct other research on public and private lands across the state to inform our deer management activities such as setting seasons and limits.

According to data reported through tagging and the Deer Management Assistance Program, the highest harvest rates come from upland and bottomland hardwood habitats, primarily along the Mississippi River. These highly productive habitats have the most fertile soils and more hard mast (acorns and other nuts) and are surrounded by large-scale agriculture, all of which contribute more food resources to deer.

Most of the statewide deer harvest comes from the low to moderately productive northwest mixed pine/hardwood habitat due to its vast acreage. This is a large region, consisting of rural, heavily forested and mostly pine dominant parishes. The rest of the state’s deer habitats are considered low in productivity. These habitats include swamp hardwoods, coastal marsh, coastal prairie, longleaf flatwoods, and historic longleaf. 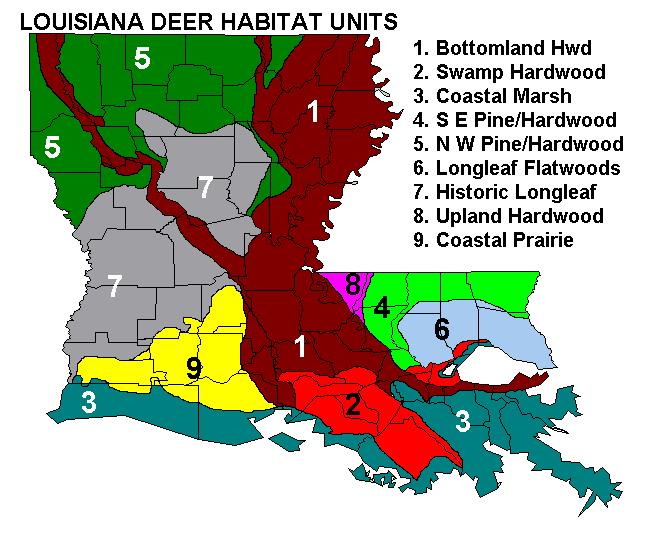 For more information, contact Johnathan Bordelon at jbordelon@wlf.la.gov or 318.487.5334.

We continue to improve the statewide breeding period database by collecting data on pregnant females during the spring in areas where data is lacking or outdated. Fetal measurements (lengths of fetuses) give fairly precise estimates of breeding dates for females. The number of fetuses per female provides a productivity estimate for a particular site. We use this information to predict breeding dates for a larger area and provide hunters with a map of estimated deer breeding periods to use to better target the rut in their respective deer areas.

Several parishes in Louisiana have two or more breeding periods, primarily due to stocking deer with different breeding periods from native deer. During the early breeding periods, we take biological samples such as kidney fat, weight, and presence of liver flukes from deer harvested by hunters. We also collect and analyze blood samples for hemorrhagic disease and other blood borne pathogens, brain stems to monitor for chronic wasting disease, and sometimes rumens (part of the stomach) for browse (vegetation) content.

We add data from all samples to individual parish breeding databases, as well as the statewide database. We donate all meat to parish food banks, charitable organizations, or families in need.

In a constantly changing landscape, it’s important to continually monitor habitat conditions, including available food (browse), that may affect deer carrying capacity (the number of deer an area can support), health, and recruitment (survival of young).

Habitat conditions are determined by environmental variables such as soil type, temperature, rainfall, and mast crops; proximity to agriculture, forestry, and other land uses; and deer density. Landowners and public land managers use data from these surveys to develop harvest and habitat management strategies for their property.

Seasonal Flooding Effects on Deer in the Mississippi River Batture

Researchers from Mississippi State University, the Mississippi Department of Wildlife, Fisheries, and Parks, and LDWF conducted a meta-analysis of 61 batture properties from Greenville, Mississippi south to Baton Rouge, Louisiana, to measure the potential influence of flooding on morphological (size and shape) measurements and demographics of white-tailed deer. Researchers evaluated records from 1988 through 2016, including harvest records of 42,954 does and 3,588 bucks from both states, to compare influences from winter, spring, and summer flooding on doe body mass and lactation rates and antler mass of trophy bucks. Researchers modeled the seasonal effects along with weather and harvest variables. There were subtle differences in doe body mass and buck antler mass from seasonal flooding, but the significant difference occurred during summer floods when adult female lactation rates dropped by 18%. This research was was published in the Journal of Wildlife Management in 2019.

Before Louisiana was colonized, the statewide deer population was estimated at 400,000. During the 19th century, early settlers and market hunting reduced the herd. Large-scale timber cuts in the late 1800s and early 1900s left deer concentrated in remaining cover and habitat where they were vulnerable to overharvest. At the time, hunting laws and bag limits were too liberal or not enforced, and deer numbers fell dramatically. The deer population was lowest between 1915 and 1925, with an estimated all-time low of 20,000 deer in 1925. However, some deer survived in the deep swamps and margins, and as formerly deforested habitats grew into second growth forests, the deer population began to recover.

LDWF began managing deer in the late 1940s, setting seasons and restocking deer. By the early 1950s, managers had built a successful restocking program—deer were captured, initially using box type traps and later airboats, at public and private land tracts throughout the state such as at Delta National Wildlife Refuge and imported from Texas and Wisconsin. Deer were restocked in 42 parishes. Most successful restocking efforts were in-state transplants; recent DNA analysis does not show any remnant genetics from northern lineages. Today, the deer population is estimated to be at least 500,000.

Managers have been able to relax hunting regulations over the years in response to increasing deer herds. In 1960, there were 22 deer management areas and most deer seasons were only 2 to 4 weeks, with the longest at 56 days. The season limit was two deer per hunter, hunting was often limited to mostly bucks, and many areas were closed to hunting altogether.

Today, we have divided the state into 10 deer management areas. We set seasons for each area according to general breeding periods, habitats, and hunting methods. In some areas, we have 90-plus day gun seasons and 120-plus day bow seasons. Currently, the statewide season limit is six deer per hunter, not to exceed three antlered or four antlerless per season, except in areas 4 and 10, where limits are reduced to three deer per season, not to exceed two antlered or two antlerless deer per season. Hunters may take antlerless deer during the entire season in all areas except areas 5 and 9 where antlerless hunting is limited to designated days. There is a daily bag limit of one antlered deer and one antlerless deer (when they can be legally harvested).

We require that hunters tag all harvested deer prior to moving them from the harvest site and validate each kill via phone (225.267.9998), online, wildlife management area staff, or the Deer Management Assistance Program on program lands. We use the harvest information collected through tagging and validation to set future seasons and limits.

LDWF holds managed deer lottery hunts on wildlife management areas every year to allow harvest of surplus deer and prevent habitat damage from overbrowsing (too many deer feeding in an area). Seasons are generally shorter on public lands than on private lands because there is higher hunter use over a shorter period of time on WMAs than on private lands. We collect biological data from deer harvested during these hunts and use these data to assess population health.

Using information from habitat surveys, LDWF also provides the U.S. Forest Service and U.S. Fish and Wildlife Service with recommendations regarding deer habitat, hunting season dates, and other deer management activities on their lands (national forests, refuges, etc.). These agencies conduct managed deer hunts and collect some biological data from deer harvested during these hunts. They submit these data to LDWF for review.