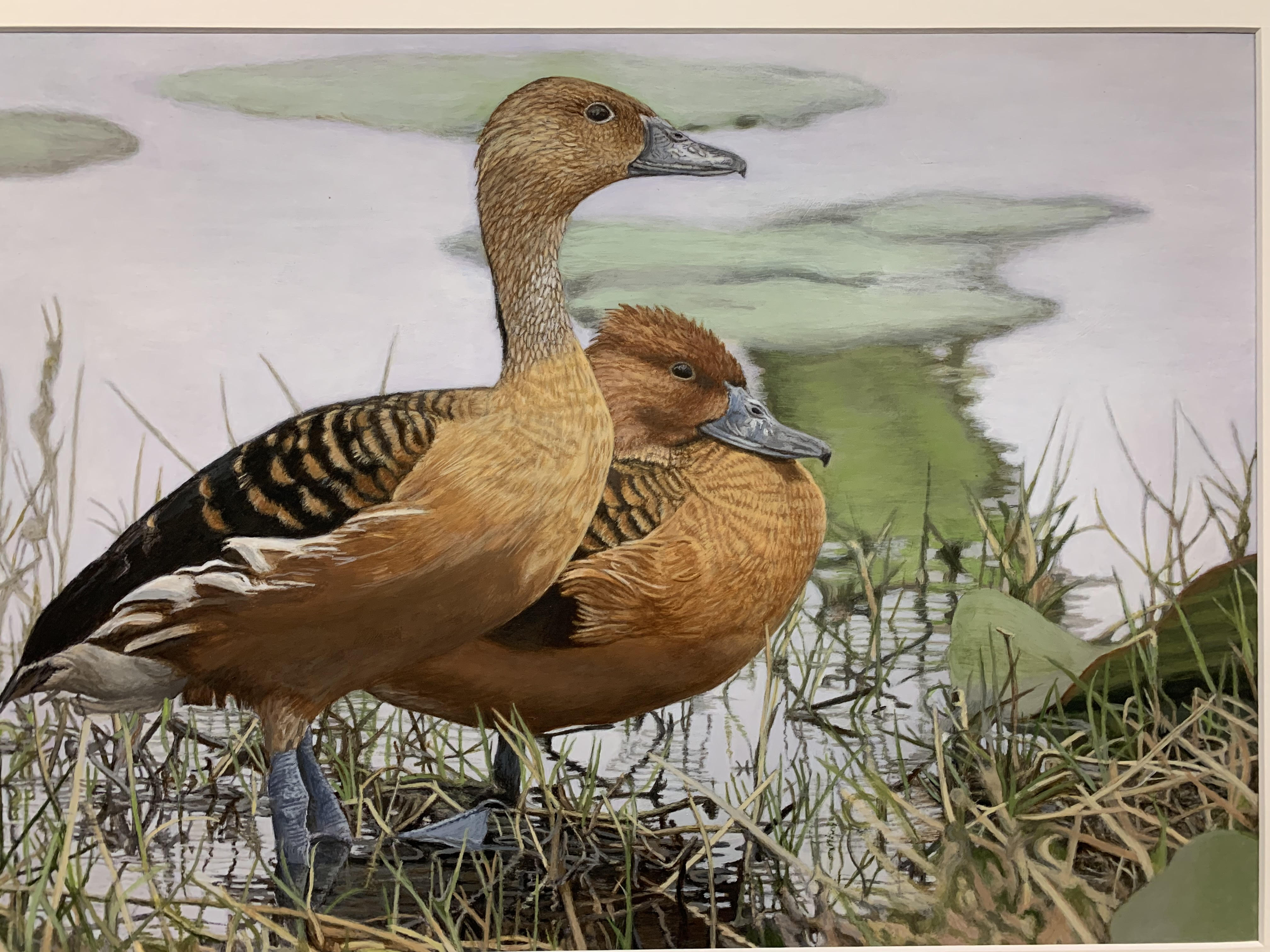 Louisiana native Elaine Erikson has won the 2022 Louisiana Waterfowl Conservation Stamp Competition sponsored by the Louisiana Department of Wildlife and Fisheries (LDWF). She is the first woman to win the contest.

The annual contest, in its 34th year, determines the image on what is commonly called the Louisiana Duck Stamp.

Erikson, a retired CPA from River Ridge, was born and raised on Bayou Teche in Iberia Parish. This was her first time entering the Louisiana Duck Stamp contest.

Her paintings tend to be very realistic in style, revealing extensive detail. Erikson’s favorite medium is acrylic but she also paints in oil, watercolor, colored pencil and pastels. She belongs to several area art guilds and has shown paintings in numerous art shows in the New Orleans and Baton Rouge areas.

The fulvous whistling duck was the species selected for this year’s contest and Erikson’s painting features two ducks resting in a marsh setting.

There were 17 entries posted, including seven from Louisiana residents.

Larry Wilburn of Dayton, Texas, was second and Anthony Padgett of Noblesville, Indiana third. Wilburn placed third in both the 2016 and ’17 contests. Padgett won the 2009 Louisiana Duck Stamp contest, was second in 2021 and third in 2020.

Adults are a striking orange-brown color on the head, neck and chest, thus the name fulvous, with blue-gray bill and feet, a black-barred back, white stripes on the flank and distinctive white V above the tail.

Louisiana provides primarily breeding habitat for fulvous whistling ducks. They arrive from wintering areas in Mexico, or further south, from mid-April through early May, taking up residence primarily in the rice-growing region of southwest Louisiana.

The Louisiana Legislature authorized the Louisiana Waterfowl Conservation Stamp program in 1988. The program was created to generate revenue for conservation and enhancement of waterfowl populations and habitats in Louisiana. Since 1989, more than $14.7 million has been generated for wetland conservation with approximately $6 million spent on land acquisition. A total of $268,332 was raised last year.

In addition, revenues have supported wetland development projects on wildlife management areas and the Louisiana Waterfowl Project, a cooperative endeavor between LDWF, Ducks Unlimited, the USDA Natural Resources Conservation Service and U.S. Fish and Wildlife Service to provide habitat for waterfowl and other wetland birds on private lands.

The 2022 stamp will go on sale June 1, 2022. The artist will retain the original artwork and will have reproduction rights to the image for prints and other commodities after LDWF has used the image to produce the stamps.