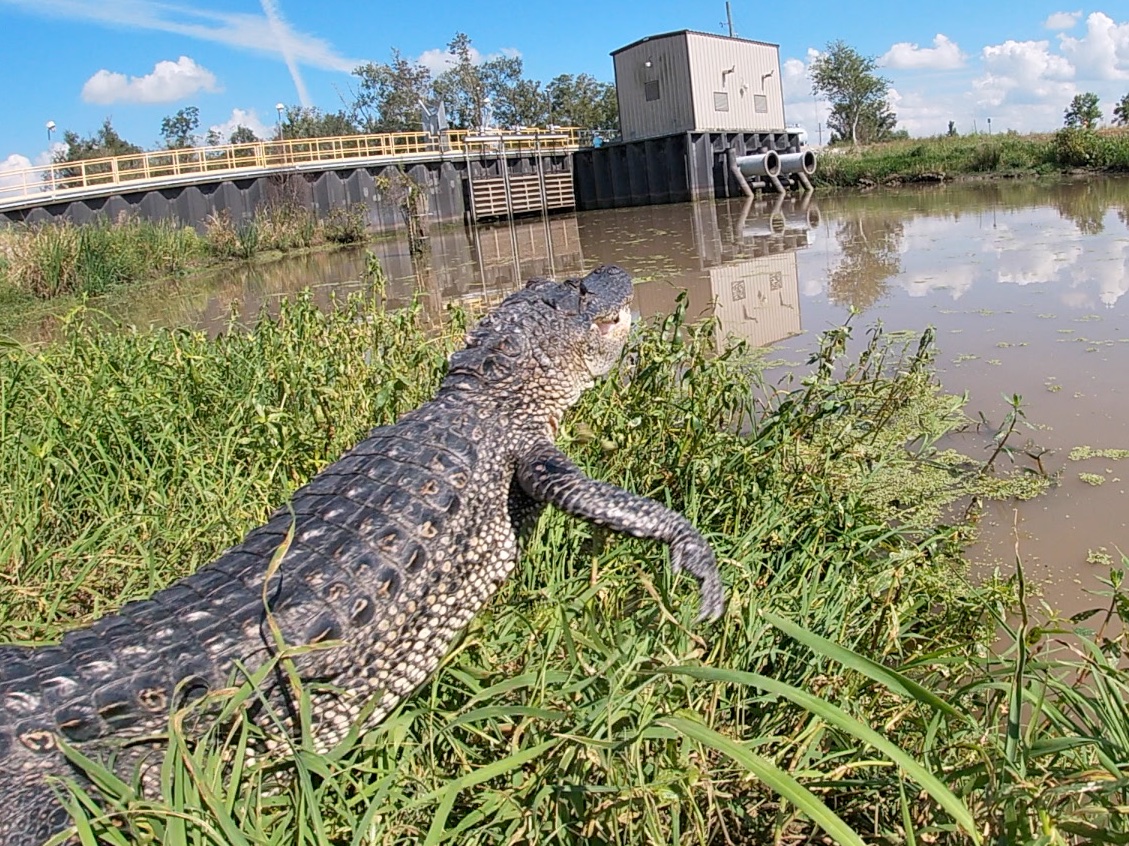 An American alligator launches into a canal on the Bayou Teche NWR.

The Louisiana Department of Wildlife and Fisheries (LDWF) released six alligators and two birds Thursday (Oct. 7) as part of the agency’s rehabilitation of wildlife found covered with oil at the Alliance Refinery in Belle Chasse after Hurricane Ida.

The alligators, the largest at 5 feet, 7 inches long, along with a white ibis and purple gallinule, were released at the Bayou Teche National Wildlife Refuge in Franklin, all part of LDWF’s ongoing rehabilitation effort. LDWF has released several birds rehabbed at the facility in recent weeks.

“As you would expect, rehabilitation of alligators poses a host of safety concerns,’’ said Jon Wiebe, LDWF’s Restoration Program Manager. “As such, LDWF always utilizes trained personnel that follow established protocols to ensure the safety of our personnel as well as the wildlife.’’

The rehabilitation of the alligators takes considerable effort and precautions. The alligators are housed within individual enclosures that have been shown to expedite recovery as well as provide safe access for rehabilitation personnel to provide care.

The alligators arrive at the rehab center with their mouths tapped, a safety measure for LDWF and rehabilitation personnel as well as the animal. While in the rehab center, oiled alligators are washed with mild detergents and water over a period of several days to remove residual oiling. Occasionally, an alligator’s mouth has to be flushed with water to remove residual oil from previously captured food items.

LDWF’s oiled wildlife response activities at the Alliance Refinery began on Sept. 5, soon after Hurricane Ida struck on Aug. 29.  More than 100 birds and other wildlife species were documented with some degree of external oiling. LDWF safely captured and transported oiled wildlife including 32 birds, six alligators and 10 snakes to the designated rehabilitation facility in New Iberia.

Response professionals have also encountered a limited number of impacted rabbits and white-tailed deer at the spill location.

LDWF is working in partnership with the Louisiana Oil Spill Coordinator’s Office, the Louisiana Department of Environmental Quality, the U.S. Coast Guard and the U.S. Fish and Wildlife Service. Alliance Refinery is assisting in the recovery as well.

For photos and video of the event, go to https://ldwf.canto.com/v/2ndReleaseofOiledWildlife.