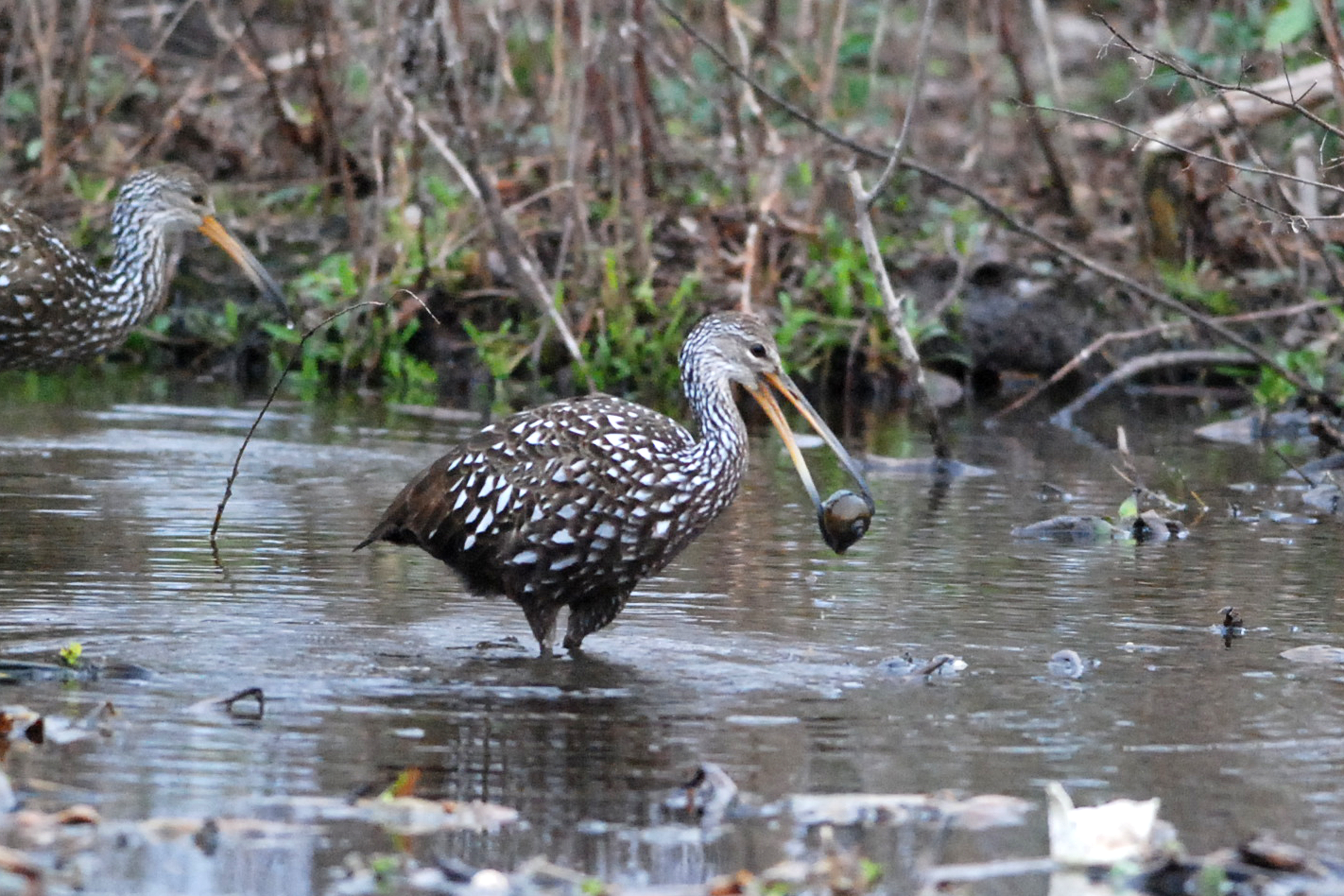 Limpkins, which have a strong appetite for invasive apple snails, have been spotted breeding in Louisiana.

A visitor from Florida that has taken up residence in Terrebonne Parish could be good news in Louisiana’s fight against the invasive apple snail. At least three pairs of limpkins (Aramus guarauna), a wading bird found primarily in Florida’s freshwater marshes, are now breeding in Terrebonne Parish.

The upside is that limpkins have a ravenous appetite for apple snails, an invasive species which have exploded in abundance in south Louisiana waterways and marshes, and are difficult to eradicate. Apple snails can easily overpopulate areas by out-competing native species and destroying aquatic vegetation.

“It really looks like limpkins are getting a foothold here,’’ said Robert Dobbs, the Louisiana Department of Wildlife and Fisheries’ non-game ornithologist. “Seemingly, as soon as they showed up, they started breeding. We’re only talking about three or four pairs that we know of at this point, but that’s remarkable for a bird that was first discovered in the state only four years ago.’’

And while only a handful of pairs have been confirmed so far, there could be more, Dobbs said. He believes that a wandering limpkin or two happened upon ideal, food-rich habitat in Louisiana, and they are staying here because of the abundance of the apple snail, their favorite food.

Limpkins, once almost hunted to the brink of extinction in the early 20th century, resemble a crane or, perhaps, a long-legged rail. They are found primarily in the American tropics and in Florida in the United States.

“Most likely, you might confuse them with an immature white ibis, or a glossy or white-faced ibis,’’ Dobbs said. “Immature white ibises have a lot of dark on them and glossy and white-faced ibis are all-dark, long-legged birds with decurved bills. Limpkins have more white speckling in their dark plumage, and their bills are not as curved as ibises, but they’re superficially similar to ibises in general’’

Limpkins are known for their loud wails that can be heard at night or dawn. Their long, slightly curved bills are perfectly suited for extracting apple snails from their shells. Dobbs said they pose no downside for Louisiana’s other wading birds.

“They wander around naturally,’’ Dobbs said. “They’ve wandered up the east coast in the past and around the southeast. Typically, when they show up out-of-range, they eat clams and other mollusks for a while, and then they leave. They generally don’t persist in those odd places well outside of their core range. It’s possible we had some birds wandering around and they happened upon the Terrebonne-Lafourche area, which is full of apple snails. So why leave? There’s a ton of food. The habitat is good. Presumably the climate is okay. They’ve persisted thus far, and they’ve been nesting for three years now.’’

The first recorded observance of limpkins in Louisiana was in 2017 in Lafourche Parish. Then in the spring of 2018, a pair nested successfully near Houma. Other pairs were noted in 2019 at Bayou Black in western Terrebonne Parish and in 2020 near Mandalay National Wildlife Refuge, also in Terrebonne Parish.

Dobbs said the limpkin isn’t a solution for the apple snail problem, as there are probably too few breeding pairs at present to really impact the apple snail on a landscape scale.

“At this point, there aren’t enough limpkins to make much of an impact on the apple snail population,’’ Dobbs said. “But if this trend continues and limpkins really do become established, it’s possible that they could provide some level of bio control.’’

“We believe the pairs here now showed up from Florida and have not left,’’ Dobbs said. “There is no evidence that they’re migrating back and forth. They came and stayed.’’

For more information about the limpkin, contact Robert Dobbs at rdobbs@wlf.la.gov. Click on https://ldwf.canto.com/v/limpkins/allfiles?viewIndex=0 for an interview with Dobbs.