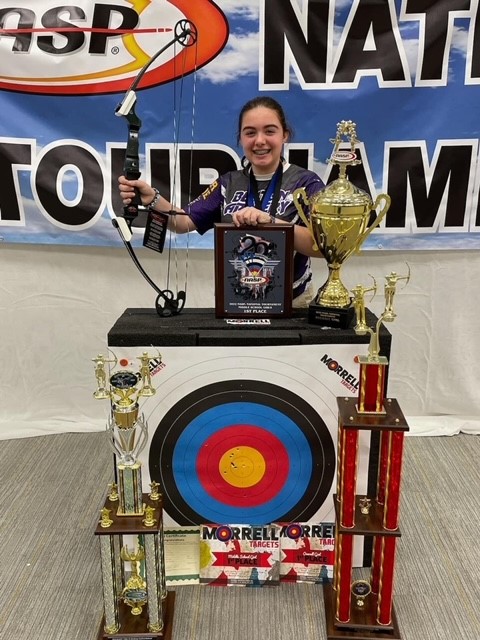 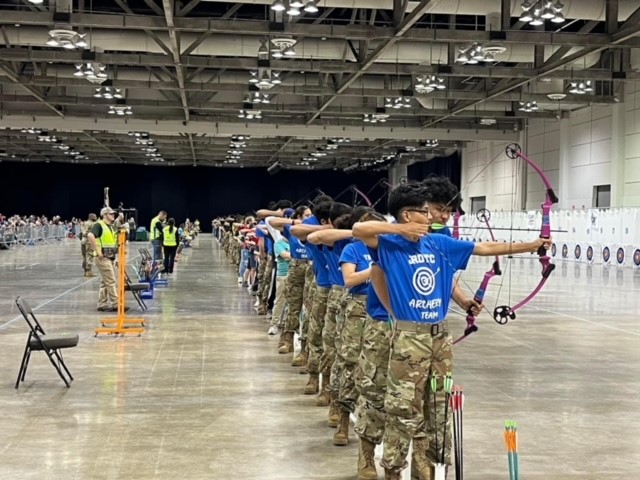 Competitors in an Archery in Louisiana Schools tournament event.

Benton Middle School is part of the Archery in Louisiana Schools (ALAS) program, administered by the Louisiana Department of Wildlife and Fisheries (LDWF) and sponsored by the Louisiana Wildlife and Fisheries Foundation. ALAS takes part in NASP, which introduces students in grades 4 through 12 to international target-style archery. The program is designed to be taught as part of the school’s curriculum, such as in the school’s physical education program. Many schools involved in ALAS also develop after school programs and archery clubs.

Benton Middle also captured the National 3D Challenge Event with a score of 1,708. Jewel Blakey of Calvary Baptist won the individual girl’s 3D championship with a score of 292. Blakey finished 10th in the bullseye division (291). Madison Hammersla of Benton Middle was third (291).

Jacob Robertson of Tioga High was ninth in the high school division (294).

In the state bullseyes tournament held in March in Shreveport, Tioga High won the high school division, Benton Middle the middle school division and Benton Intermediate the elementary school division. Zoe Bayne of Haughton Middle was the top female competitor with a score of 291 and Luke Ward of Pineville High the top male archer (297).

Archery in Louisiana Schools awarded $20,500 in scholarships between the state Bullseye and 3D tournaments. For a complete list of scores for all tournaments go to https://nasptournaments.org/Default.aspx .

“Archery is a great way to get students involved in a lifelong sport, a school program, and in the outdoors,’’ said LDWF’s Chad Moore, who coordinates the ALAS program. “ALAS seeks to inspire confidence in students through the focus and discipline that archery requires. Statistically, students involved in an archery in the schools program work harder in the classroom and feel more connected to their school. These programs engage both boys and girls equally.’’

For program information or to get archery started at your school, contact Chad Moore at 318-230-4352 or cmoore@wlf.la.gov.