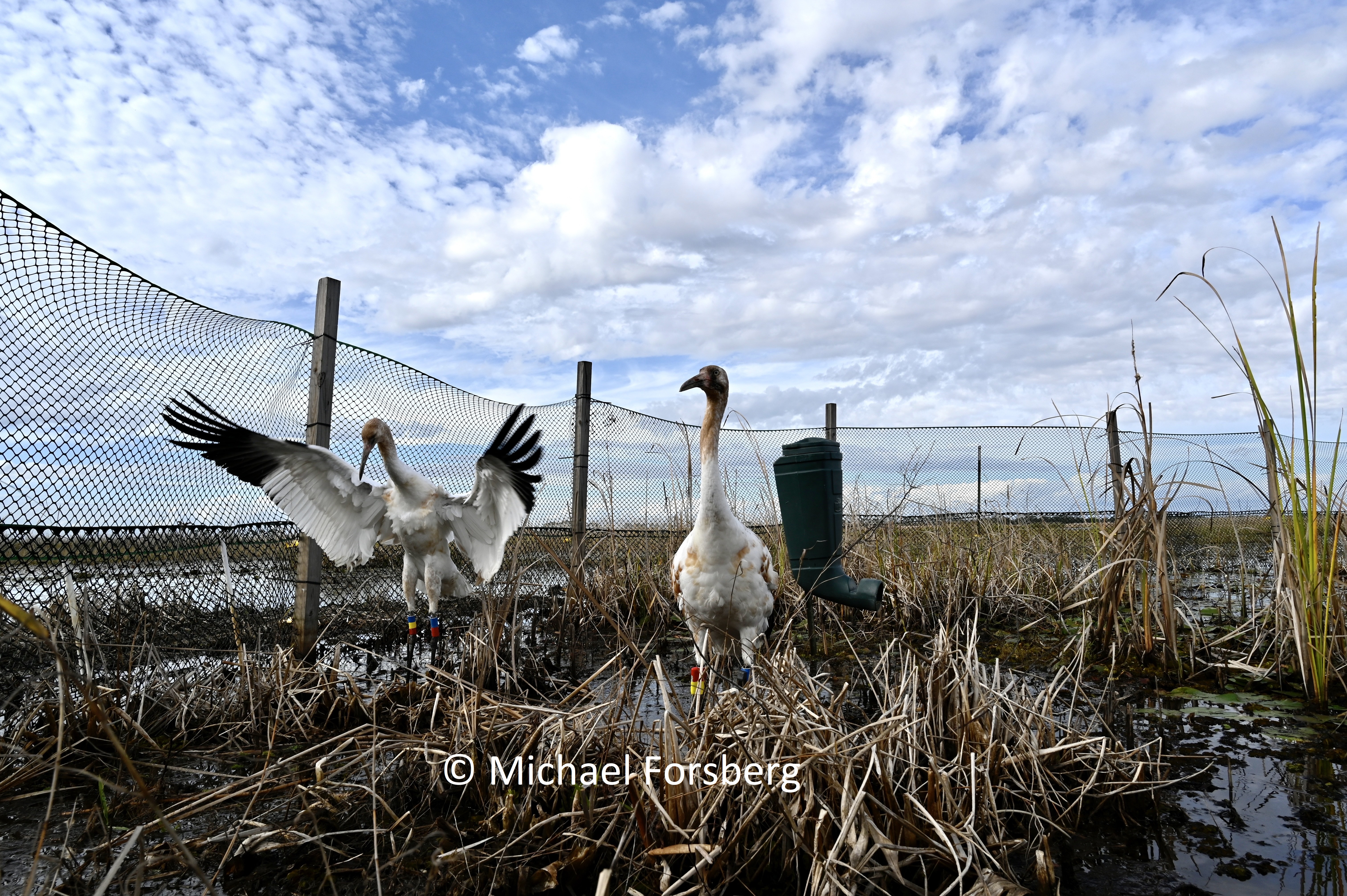 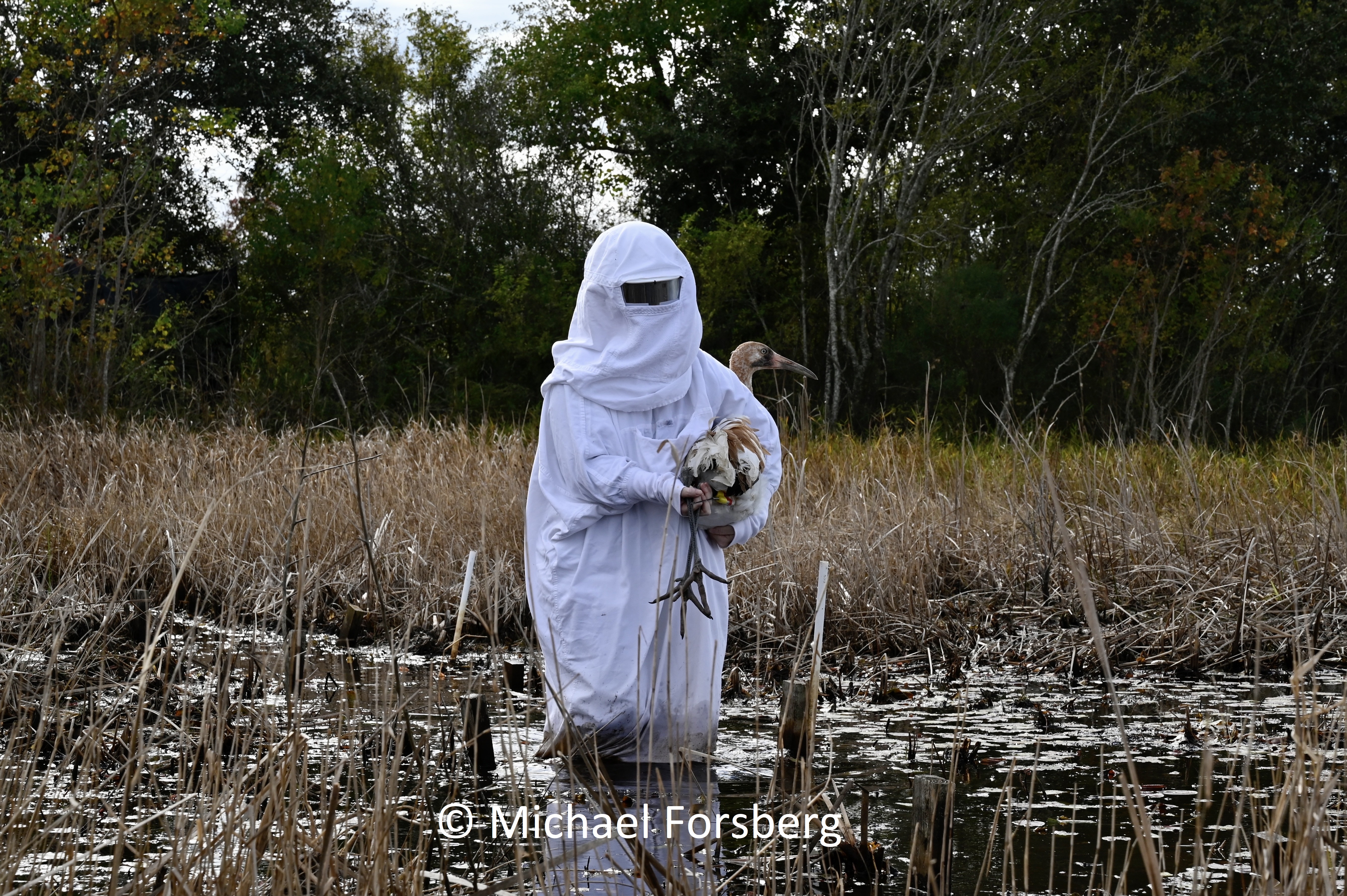 The Louisiana Department of Wildlife and Fisheries (LDWF) added three whooping cranes last week to its experimental population as it seeks to re-establish the state’s whooping crane population.

Four juvenile cranes, hatched and reared at the Freeport-McMoRan Audubon Species Survival Center in New Orleans, part of the Audubon Nature Institute, were received at LDWF’s White Lake Wetlands Conservation Area (WCA) near Gueydan on Wednesday (Nov. 10). Unfortunately, one of the cranes died just a few days after its release.

The annual release of juvenile cranes was cancelled in 2020 due to the COVID-19 pandemic.

LDWF and Audubon Nature Institute have been longtime leaders in whooping crane conservation in Louisiana and are continuing to expand their partnership with the goal of developing a self-sustaining population of whooping cranes in Louisiana.

LDWF and Audubon are committed to the long-term growth and stability of the whooping crane population. That commitment is supported by the U.S. Fish and Wildlife Service, Chevron, Conoco Phillips, Cameron LNG, Coypu Foundation and the Louisiana Wildlife and Fisheries Foundation.

Since 2011, Chevron has invested in LDWF’s whooping crane reintroduction project. In addition to Chevron’s financial contributions, their employees have also given volunteer hours.

“We continue to see progress in our whooping crane project despite the setback from the pandemic,’’ LDWF Secretary Jack Montoucet said. “Adding three additional cranes, coupled with the cranes hatched in the wild last spring, is a positive step in our venture. We thank Chevron and our other corporate partners, along with Audubon, in our effort to restore this special bird to Louisiana.’’

With the release of the new arrivals into the wild the current Louisiana population is 73   cranes.

The Louisiana flock began in 2011 when 10 whooping cranes from the U.S. Geological Survey’s Patuxent Wildlife Research Center in Maryland were released at White Lake WCA to develop the non-migratory flock. This marked a significant conservation milestone with the first wild whooping cranes in Louisiana since 1950.

Anyone encountering a whooping crane is advised to observe the bird from a distance and to report the sighting to LDWF (https://www.wlf.louisiana.gov/page/report-a-whooping-crane-sighting-or-violation ). Whooping cranes are large-bodied, white birds with a red head and black facial markings. Birds measure a height of five feet and have a wingspan of 7 to 8 feet that makes them very distinctive. In flight, whooping cranes display black wing tips and a fully extended neck and legs, which extend well beyond the tail. For more information about the project please visit LDWF’s website: https://www.wlf.louisiana.gov/subhome/whooping-crane and Facebook page: https://www.facebook.com/lawhoopingcranes/.

Anyone witnessing suspicious activity involving whooping cranes is advised to call the LDWF’s Enforcement Division at 1-800-442-2511 or use the tip411 program, which may offer a cash reward for information leading to arrests or convictions. To use the tip411 program, citizens can text LADWF and their tip to 847411 or download the "LADWF Tips" iPhone app from the Apple iTunes store free of charge. Citizen Observer, the tip411 provider, uses technology that removes all identifying information before LDWF receives the text so that LDWF cannot identify the sender.